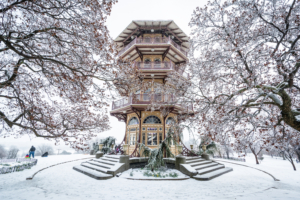 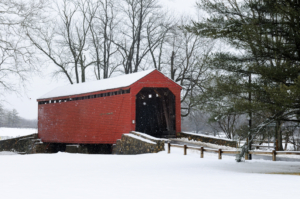 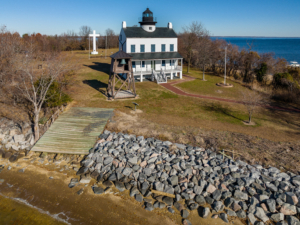 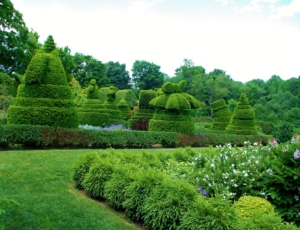 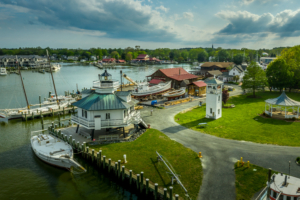 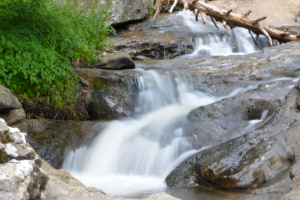 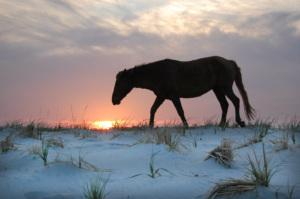 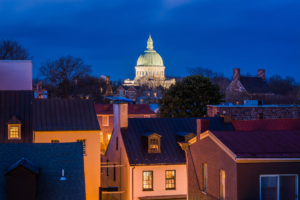 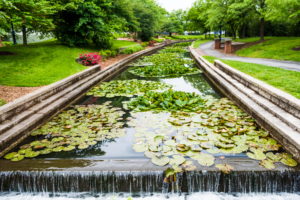 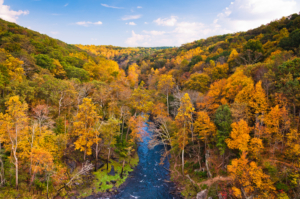 Where in MD is this? 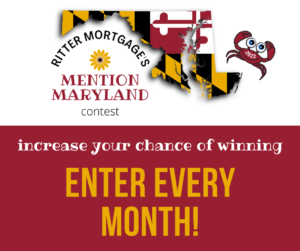 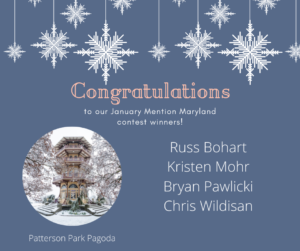 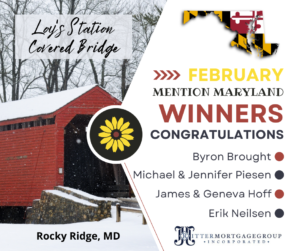 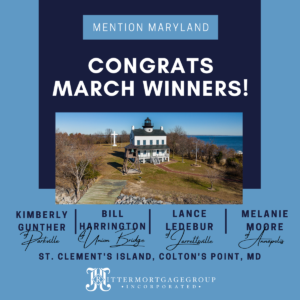 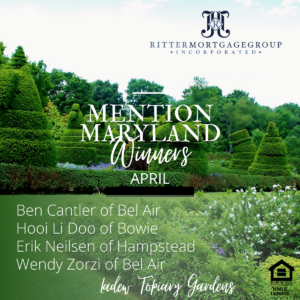 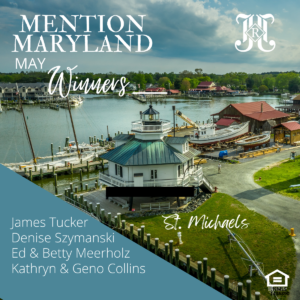 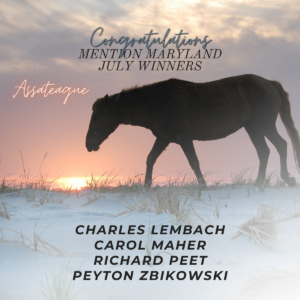 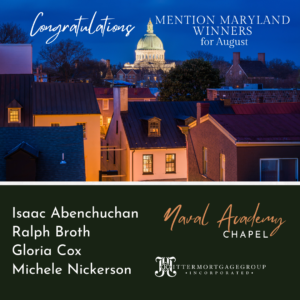 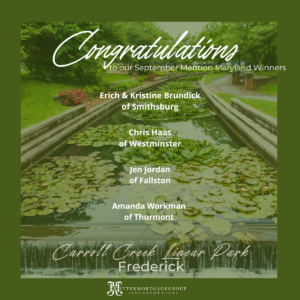 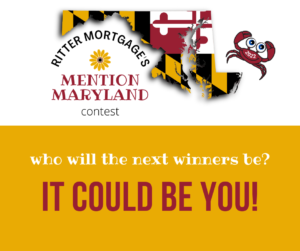 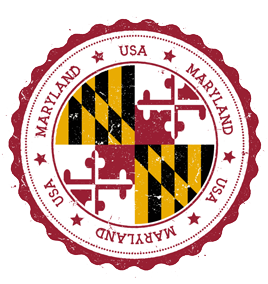 NO PURCHASE NECESSARY TO ENTER OR WIN. A PURCHASE WILL NOT INCREASE YOUR CHANCES OF WINNING.

Eligibility: This RITTER ROAD TRIP Monthly Contest 2022 (“Contest”) is open to all Ritter Mortgage Group, Inc. clients and former clients who are legal residents of the fifty (50) United States and the District of Columbia and are at least eighteen (18) years old at the time of entry. Void outside the USA, in Puerto Rico, the US Virgin Islands, and other United States territories and possessions. The contest is subject to all applicable federal, state, and local laws and regulations and is void where prohibited by law.

Sponsorship: The Contest sponsor is RITTER MORTGAGE GROUP, INC. (“Sponsor”), located at 1230 NOTTINGHAM ROAD, WESTMINSTER, MD 21157. Sponsor and its respective affiliates, subsidiaries, successors, assigns, agents, representatives, officers, directors, and employees, and any entity involved in the development, production, implementation, administration, judging, or fulfillment of the Contest, including without limitation, the immediate family members of such individuals, are not eligible to participate. Sponsor will conduct the Contest substantially as described in these Official Rules.

Entry Periods: Monthly Contests begin and end on the following dates. Entries submitted before or after the Contest Period will be disqualified. Submissions will be accepted for the duration of the Contest via text message or email.

Limitations on Entries: Limit one entry per family per postal address per month. No third-party entry or entry through any contest or sweepstakes service is permitted. Any person who attempts or otherwise encourages the entry of multiple or false contact information under multiple identities or uses any device or artifice to enter or encourage multiple or false entries, as determined by Sponsor, will be disqualified. Use of robotic entry devices is strictly prohibited.

Monthly Prizes: One (1) Monthly Prize will be awarded each month from January through November. Each Monthly Prize consists of a gift card in the amount of $50. No substitution or cash equivalent is permitted. Each prize is awarded “as is” with no warranty or guarantee, either express or implied, by Sponsor or Administrator. Limit one prize (gift card) per person per month.

Monthly Prize Winners: One (1) Monthly Prize is awarded to one (1) randomly drawn entrant from among all entrants to correctly identify the location of the photograph on that month’s mailed card within the Entry Period listed for said month.

Grand Prize: One (1) Grand Prize will be awarded in December, which consists of the choice of either two (2) America the Beautiful National Parks and Federal Recreational Lands Passes or a gasoline gift card of equivalent value. Winner agrees to accept the Grand Prize “as is” and entrants hereby acknowledge that neither Sponsor nor Administrator is in any manner responsible or liable for any warranty, representation, or guarantee relative to the Grand Prize, including warranties provided exclusively by a prize supplier. Additional terms and conditions may apply to event suppliers for which Sponsor and Administrator shall not be responsible or liable in any way for any cancellations, losses, or damages. Approximate retail value of the Grand Prize is $160, based on the current year’s value and may differ depending on fluctuations in cost at time prize is awarded. Any difference between stated approximate value and actual value of Grand Prize will not be awarded. Winner may be responsible for any federal, state, and local taxes. Grand Prize will be issued in the form of either park passes or gift card.

Grand Prize Drawing: One (1) Grand Prize winner will be selected in a random drawing from among all eligible entries collected during the Entry Period. The drawing will take place on or about December 8, 2022 at Sponsor’s place of business. The drawing will be conducted by Sponsor, whose decisions and interpretations on all matters relating to the Contest and these Official Rules are final and binding in all respects.

Notification & Awarding of Prizes: Winners will be notified via text message or email within 72 hours of deadline for that month’s contest. Inability of Sponsor to contact winner within 72 hours after initial notification may result in disqualification of Winner, and an alternate winner may be selected. Within fourteen (14) days after Winner has been notified and accepted the prize, Monthly Prize will be sent to Winner via USPS, UPS, or FedEx to Winner’s address on file or alternate address provided by Winner. If prize is returned as undeliverable, then prize will be forfeited and another winner will be chosen.

Odds: The odds of winning will depend on the number of eligible entries received, according to the eligibility requirements of the Contest.

General Terms: Participation in the Contest constitutes entrant’s full and unconditional agreement to acceptance of these Official Rules and decisions of the Sponsor, which will be final and binding in all respects. Sponsor reserves the right, at its sole discretion, to refuse, disqualify, or withdraw any entry at any time and may refuse to award a prize to a person who is not eligible or has violated a rule, gained unfair advantage in the Contest, or obtained winner status using fraudulent means. If there is a dispute about the identity of an entrant, prize will be awarded to the natural person to whom the phone number or email address is assigned by the service provider responsible for the associated phone number or email address. If the winner is found to be ineligible or not in compliance with Contest rules, winner will be disqualified and an alternate winner will be awarded the prize. Sponsor will not be responsible for any injury, damage, or loss of any kind arising out of your participation in the Contest. You agree to release, discharge, and hold harmless Sponsor, its affiliates, subsidiaries, employees, officers, directors, agents and assigns from and against any or all claims, losses, injuries, or damages resulting from participation in the Contest. Sponsor will not be responsible for delays in mailings of cards and/or prizes that are beyond Sponsor’s control, such as USPS, UPS, or FedEx delivery delays. Sponsor will not be responsible for lost or stolen prizes. Except where prohibited by law, by accepting prize, winner grants Sponsor a perpetual, worldwide, royalty-free license to use winner’s name without further authorization, compensation, or remuneration of any kind for advertising, promotion and other publicity purposes in any and all media now or hereafter known throughout the world. Other personal data, such as phone number, and/or email or mailing address of Contest entrants, will be used solely for purposes of updating Sponsor’s client database.

Winner’s Name: The name of winner is available only within 30 days after close of each month’s Contest. To receive the name of the winner, where permitted by law, contact the Sponsor at RitterRoadTrip@RitterMortgage.com.

Printout of Official Rules: For a printed copy of these rules, contact Sponsor at RitterRoadTrip@RitterMortgage.com.

WARNING: Any attempt by any person, whether or not an entrant, to deliberately damage, destroy, tamper with or vandalize any sponsor-owned website or mobile application or related social networking site, the entry process, or otherwise interfere with or undermine the legitimate operation of the Contest, may be a violation of criminal and civil laws, and Sponsor reserves the right to seek damages and diligently pursue all remedies against any such person to the fullest extent permitted by law.